I removed further items critical to the respray today. First I drilled out the rivets which hold the door switches in place and then removed them and tidied up the under dash loom. Then I removed the door handles and locks to both front doors. This was straightforward although the space is limited and the thread on the lock was very long.  Many turns of an adjustable spanner were needed. I have left the inside door handles and the latch and slam plate on the car as Gavin (Reef Paint Shop) advised that it was better to leave them so at least the doors are held shut during transport to the paint shop.

I then took a deep breath and pulled all the headlining trims off. Some of these pulled off easily (they are glued) and others snapped as they had become brittle. This allowed the headlining to be dropped out as a whole piece, albeit broken around the edges. A new clean one will smarten up the interior during the rebuild. There were some sundry trims left glued to the door pillars so I peeled those off too, keeping a couple of representative samples for reference in the rebuild. I then turned my attention to the boot where I disconnected the rear loom, including taking the ceiling rose light cables and the heated rear screen cable and pulling them through the pillar so I could bundle up the whole loom into a bag. This is to protect it from the sand-blasting process. 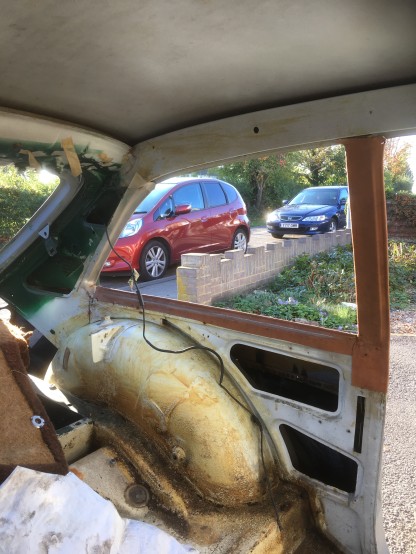 A beautiful autumn day, warm and sunny I took some record photos of the car outside. On a mundane note I had bought some new storage boxes and so I tidied up some of the parts into better shaped boxes.